Is Hansel and Gretel: Witch Hunters Worth Seeing in 3D?

I've always found it fascinating that converting a Grimm Fairy tale, which were traditional children's stories in the day, translates into an R rated movies in today's mindset. Kind of an interesting commentary on how things change. I mean, if the Brothers Grimm showed up at preschool today with a rendition of their fairy tales, I'm guessing they'd be brought up on charges. But darn ...do they make good action horror flicks!

The movie picks up where the historical Grimm tale leaves off, with (Jeremy Renner) and Gretel (Gemma Arterton) all grown up having had turned their childhood terror into a career of hunting witches. Hansel and Gretel are hired to help find a group of missing children and finish off the witch who is taking them, which puts them on a collision course with the Evil Grand witch, Muriel (Famke Janssen). Hansel and Gretel seems very reminiscent of the 2004 movie Van Helsing in its feel. Its has costuming and weapons that were out of place to the time frame. Not quite as well written, not quite as defined, but nonetheless very fun with a touch of corniness. Humor balances the bad-ass siblings well, and they carry enough gear, guns and gadgetry to splatter any witch that wanders their way. Plus, Pihla Viitala's performance as Mila is simply breath taking (Guys you'll agree.)

From a 3D perspective, loved it. The opening credits were just simply awesome to watch. It's a testament on how today's directors are combining live / cgi / 3D to come up with some truly impressive stuff. Throughout the movie arrows, woods, witches, witch guts (I think it was guts, could have been brain), fire, and more are flying at you with such effect that I personally ducked twice and screamed, "Yikes!", once.

Not to say that the 3D was overdone or gimmicky, quite contrary, 2D viewers should enjoy this movie and the action perfectly well and may never notice the missing 3D elements. However, the 3D was shot in a way that immersed you into the event, forgetting you were in it until ZING!!!!!, an arrow flys by your temple and you jump spilling your super jumbo popcorn all over your neighbor. That's why we pay the extra $3.50, is it not?

All in all, Hansel and Gretel was a ton of fun to watch so I give it two brooms up on that basis alone. A great diversion from the daily grind. That said, if you are heading out to catch it, I highly recommend the 3D version. 2D would be fine, but 3D makes this one. Oh...but don't eat the candy. 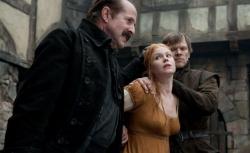 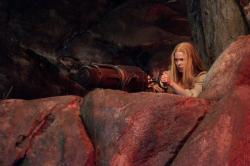 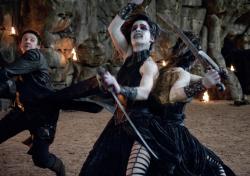