Is The Penn and Teller New'kd Las Vegas 3D House Worth Seeing? 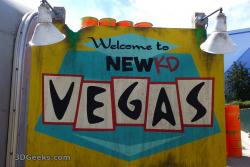 I had the good fortune to go to Universal Studios Hollywood Horror Nights, Orlando. If you're a horror junkie, it's just one of those things you simply have to take the time and do. This year, among the zombies, monsters and chainsaws there was a special edition; Penn and Teller New'kd Las Vegas in 3D.

The concept of the house is that during a magic trick, Penn and Teller accidentally set off a nuclear bomb, and given that it was Vegas they felt it could be fixed with a fresh coat of paint and a heavy dose of BS. To this extent, the house performs well. You are greeted by a automaton vomiting from radiation sickness prior to entering the "clean room" which and you can hear Penn guiding you through the house and lamenting his hatred for clowns.
The house is VERY Vegas with a homage to the tables, slots, dancing girls - you name it. Vegas is in this house. The is even a wedding chapel with a Fat Elvis and when you are not looking scare-actors dressed as Siegfried and Roy come jumping from the walls - Roy with a a white tiger attached to his throat (of course).

The house uses ChromaDepth glasses, a clear-filmed pair of glasses that moves red colors forward and blue colors backwards, giving a nice 3D sensation. The best 3D effect in the house takes advantage of this by creating a room that is a maze with linear strung red and blue LED lights. It is extremely disorienting. Then in the room is scare-actors with red and blue light costumes - so you cannot actually tell where they are, until they are right on top of you. I admit - I jumped. A manly jump - but a jump nonetheless. It was awesome.

There are some interactive things to know. First, as you walk into the "Honeymoon Suite" there is a cord that says "do not pull cord" on your left next to the bed. Its dark and you won't see it unless you look. If you pull it, the bed does things; bounces, screams, vibrates, and makes that rhythmic squeaking sound that you dread hearing coming from the room next door in any hotel. Also, there is a nuclear buffet room. It seems harmless enough. OOGY maybe. Smelly, yes. But harmless as you walk by and circle behind and pass is a selection of lit buttons. Those button will spray water at the guest who are looking at the buffet.... Except the LAST button. That sprays you. So have fun torturing others, but don't get greedy!
On exit, you are greeted with video of Penn and Teller finally giving into the notion that clowns have to be in the haunted house - They change into clowns and jump out of the walls at you as you run for the exit.

Being a long time huge fan of the duo I got most of the humor and had a sense to look for some items and enjoyed the heck out of the scenery in the house. However, I felt things were missed. First besides the gambling room and the AWESOME lights room, the 3D effects were on the weak side. Moreover, I was disappointed that the magic portion of what is Penn and Teller was simply skipped. I personally was on stage once to help perform a card trick were Teller dropped a cute fuzzy bunny in a wood chipper and my card was pulled out of the air of what was left of poor little Mittens. I simply couldn't understand something like that was just left out. Did I like the stripper nailed to the wall? Yes. The homage to all that is tacky? Sure. The clever way they led us all into the classic clown scare at the end? Absolutely! But, a 3D girl sawed in half by some radiation crazed street magicians would have been epic.

So was the Penn and Teller New'kd Las Vegas worth seeing in 3D? All in all, yes, but I I'd say a 15-20 minute wait yes. Anything longer and I'd go catch the 20 Penny Arcade show and wait to see if the lines died down...

I had a chance to snap some photos, the first few are 3D Anaglyph - You'll want glasses for those. The others are not. Sorry for the detail, light was pretty low. If you dont have glasses, you can get some from us for just 99 cents! Official 3DGeeks 3D Glasses Red/Blue Red/Cyan Anaglyph. QR Code. FREE SHIPPING!! | eBay