Heaven Benchmark is a DirectX 11 GPU benchmark based on advanced UNIGINE™ engine. It reveals the enchanting magic of floating islands with a tiny village hidden in the cloudy skies. Interactive mode provides emerging experience of exploring the intricate world of steampunk.

It is the first DirectX 11 benchmark in the world, the original version was released at the moment of Microsoft Windows 7 launch in October, 2009.

This version is free, however there is a PRO edition geared mainly to companies, available for $495 at Unigine's store https://store.unigine.com/ 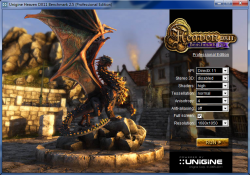