OpenSCAD is free / open source software used for 3D CAD design focused on the 3D modelling of design as opposed the the more artist areas that some other 3D modelers specialize in.

In other words, OpenSCAD acts more like a 3D-compiler than a modeler. It reads in a script file that describes the object and renders the 3D model from this script file. This technique lends to greater ontrol over the modelling process as well as allows the designer to change any step in the process at any time as well ad make designs that are defined by configurable parameters.

OpenSCAD provides two main modelling techniques: First there is constructive solid geometry (aka CSG) and second there is extrusion of 2D outlines. As data exchange format format for this 2D outlines Autocad DXF files are used. In addition to 2D paths for extrusion it is also possible to read design parameters from DXF files. Besides DXF files OpenSCAD can read and create 3D models in the STL and OFF file formats. 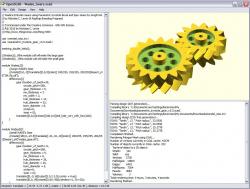 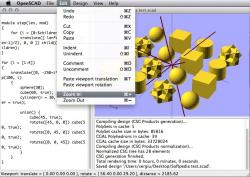