Today’s batteries have remained basically unchanged for about 100 years. The same battery that is powering your über-cool smartphone is almost identical to the one that was kicking around back in the Great Depression.


For those of you who aren’t battery savvy, here is quick tutorial.

Lithium-ion batteries have a two-dimensional surface that is either stacked or rolled, all in a planar structure (AKA, layered). The movement is routed to a one dimensional flow through a 2D plane, which essentially means that the flow of the ions have a very small, limited road to travel, thus resulting in a battery that charges slowly, needs to replaced often, and has a puny battery life. Not to mention, these batteries contain a toxic and highly flammable liquid electrolyte in the center that can literally burn your skin off. Nice.

This is where the 3D part of this comes into play.

Amy Prieto, a chemistry professor at Colorado State University, has developed the first ever 3D battery architecture! Okay, think of a sponge... Remember how in the old battery, the different components were all layered? In the 3D battery the cathode and anode are intertwined using copper foam substrate or nanowire, making for a greater amount of surface area for the ions to travel. The result is, “Very high power density, faster charger, more energy, and a much longer battery life,” according to Prieto’s informational video which I watched thirty-seven times in order to understand this (you’re welcome).

This battery structure is so revolutionary that the developer, Amy Prieto, professor at Colorado State University, was given the Presidential Early Career Award.

So. This 3D sponge battery not only shows up the energizer bunny 5000 cycles to 500 (those are real numbers by the way), the Prieto battery also leaves behind that nasty, toxic crap and replaces it with harmless citric acid, in fact, the entire production process is nontoxic! As for now, us consumers are stuck without lithium-ion buddies, but we do not lose hope. Somewhere down the road we will have a 3D spongey battery made with orange juice, and it will be awesome. 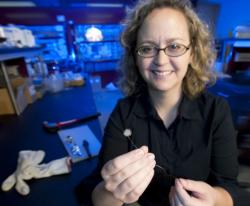 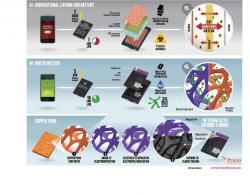