French digital artist Gilles Azzaro says that he "transforms invisible and intangible recordings into something solid and tangible," better said he makes sounds that you can see.

The inspiration for this project came from President Obama's State of the Union address from February 2013, when the President touched on 3D printing being the "next revolution in manufacturing that will be made in America."


After Azzaro listened to the speech he immediately wanted to 3D-print it, or at least a 39 second snippet. "It meant something to me when I heard it for the first time," he told Wired.co.uk.

Throughout the 39-second recording, a synchronized laser beam scans the reliefs of the vocal print, marking accurately the exact location of every sound and nuance. The 5-foot, 22-pound sculpture was then printed on a desktop 3D printer which took 50 hours to complete.

The voice sculpture was unveiled for the first time on November 7, 2013 at 3D Printshow in London, UK.

"When you look at it closely you get the impression you are looking at a mountain range or lunar landscape. The choice of using matte black and thick printing brings out the grooves like on an old record, which again underlines the visual side of an audio recording. The green laser beam that passes over the recording highlights the beauty of the soundscape."

Azzaro designed the programming software himself, having first had the idea to convert audio files to 3D images in 1993. Completed in 2006, it's now patented and "involves digitally rebuilding in 3D all the parameters of a sound".

"The image of the sound in 3D is faithfully reproduced and extremely precise -- hence the term voiceprint. This part of the work in purely mathematical, the artistic work can then begin."

Now this is a speech that I can watch (and listen to) over and over. 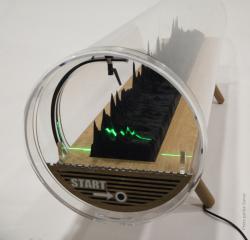 What are the opportunities for artists and designers from 3D printing? @ Digital Arts
Digtal Arts tales a look at the state of 3D Printing....

$2000 Sony DEV-5 Digital Binoculars Record in 3D HD, Plus 20x Zoom
Whether you are bird watching, ex-boyfriend stalking, stuck in the nose bleed section, or just want a really fricken cool pair of nocs, the $2000 3D Sony DEV-5 may be for you!...