ProjectHolodeck is working on a new virtual reality game that promises to immerse the player into a zombie survival horror-fest.


The folks at Project Holodeck are beginning to combine a Virtual Reality Environment with the conecpt of what it would be like to actually be inside a zombie movie in a new game called Zombies on the Holodeck. The game will combine new school VR with the old school style zombies, setting the stage in a 1940's Chicago, post biochemical warfare, of course.

The deisginers are using mainly off for design and dedicating devlopemtn to software. The game will be networkable - meaning two or more player can share the same game environment space. Each player would done a headset call an Oculus Rift which would give the 180 degree peripheral view and a Razer Hydra controller for weapons and other interactions. "Imagine how intense it is to be hammering a door shut with Hydra controllers, then hearing zombies approaching behind you from the street, and having to turn your head, pull out your handgun, aim the gun, and blow some heads off? And the gun doesn’t have infinite ammo either. In fact, you don’t know how much ammo you have unless you’re counting. To reload, you have to pick up a clip somewhere and make the physical motion to reload. The same goes for health. Say you gain health from stabbing yourself with an antidote syringe of some kind – in that case, you got to pick up a syringe and physically stab it into your arm!"

The game is in the early design phase, but here a good preview.

If you want to learn more prop over to Zombies on the Holodeck They have the usual social pages and an email list that you can sign up for to keep tabs on developments and release dates. 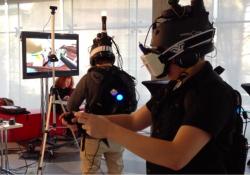 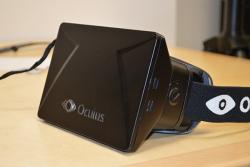